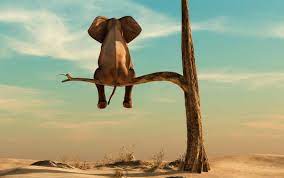 Mr Kyle Thompson | Principal During this week, I’ve tried to step back and appreciate our school and most importantly the people who fill the classrooms, offices, and grounds. I stress to our Year 12s to take some time to enjoy their last weeks, spend time with their friends, reflect …

During this week, I’ve tried to step back and appreciate our school and most importantly the people who fill the classrooms, offices, and grounds. I stress to our Year 12s to take some time to enjoy their last weeks, spend time with their friends, reflect on their teachers (and maybe say “thanks”), but especially reflect on the opportunities provided, and the emotional investment made in their development, by their parents. Our boys and girls do get this.

This has also caused me to reflect on my journey to this point at our amazing College. Every morning I walk through the school grounds, even on weekends, never tiring of the stunning vistas, unique environment, thriving wildlife (even the snakes) and history-filled buildings – if only they could talk –  that is our school. I have chosen to do this, never bored of the sight, and appreciating the place where I live and work. I hope our seniors are doing similar things as their time at the College draws to an end. Take time to notice the little things and see the place that has been an important part of who they are and have become.

This has also made me think about what is so special about this place, the buildings and the history. I have come to the realisation that whilst these things (our buildings and grounds) are truly impressive to look at, by themselves, they are just buildings and spaces. They have no life, no real meaning and no future until they are filled with people. People make places special, fill places full of life and add substance to our existences. This is the difference between a house and a home or an acquaintance and a friend. The people make the emotions which in turn make memories. Our boys and girls who leave us this year have made many memories. They leave our school in a good place. Our Year 11s have already looked to pick up the metaphorical baton and I am confident they too will do and achieve great things next year.

So whilst our buildings are grand and our grounds beautiful. The humanity, the personalities and the daily life of SCOTS PGC is where the soul is. I am grateful to all of our boys and girls for what they have added to our school. I am especially grateful to them for what they have taught me and our staff, how they have inspired us all and how they have let us all into their world for a small period of time. Similarly, the parent body have all added to this wonderful experience. It is true that we are taught as much as we teach and that will continue in any place where relationships are central to learning.

As I look back on our Year 12s final year, and what our boys and girls do and have done, there is too much to put on paper. In fact, it would lose some of its magic if we did. I encourage our Year 12s to really enjoy their remaining time here but to also look forward to the new adventure that is coming. I encourage our other students to make the most of their ever-diminishing time in this unique place. I encourage our parents to take the time to enjoy the journey that having children takes you on. And what a journey it is. 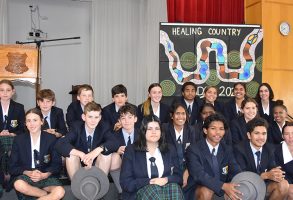 Yesterday we hosted a special assembly in honour of NAIDOC Week.  Although NAIDOC Week was actually recognised earlier in the year, at SCOTS, we chose …

Yesterday we hosted a special assembly in honour of NAIDOC Week.  Although NAIDOC Week was actually recognised earlier in the year, at SCOTS, we chose to celebrate this week which coincided nicely with the completion of a special piece of art.

Our Indigenous students have been diligently working on painting a giant Rainbow Serpent.  The project has been coordinated and led by Kaysan Miles and Jekeira Major, who’ve worked alongside students from Prep through to Year 11 to complete the piece which extends over six separate canvases.

Yesterday’s NAIDOC Assembly provided the perfect opportunity to present the art to the College and learn more about the story of the Rainbow Serpent and other traditional Dreamtime legends.  It was wonderful to be able to celebrate the Indigenous culture within our College and dedicate time to learning more about the heritage of our Aboriginal and Torres Islander students through their stories and experiences.

Special thanks to Llew Mullins from Yalari who joined us for the morning.  We are already looking forward to next year’s celebrations! 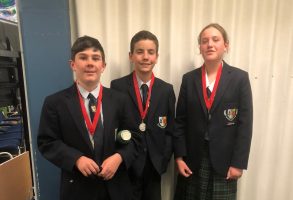 Yesterday afternoon, Ellie Amos, Isaac Ratcliffe and Bayden Tink took part in the ‘Warwick District Readers Cup’ for students in Years 7 and 8.  Unfortunately,  Meyah Proberts-Pittman was unable to make it on the day.  This competition requires students to read four books and correctly answer 15 questions on each of the stories.

This year the books were; The right way to rock by Nat Amoore, Footprints on the Moon by Lorraine Marwood, Knitting needle ninja by Michael Gerard Bauer and Dry to Dry: The seasons of Kakadu by Pamela Freeman.  The students worked hard in absorbing as much information as they could on these books and were admirable representatives for the College. Our readers placed a close second to Warwick High School.

Congratulations to the team!

Grandparents and Friends Day is a very special event on our calendar each year – it is a day that is enjoyed by students and their grandparents. 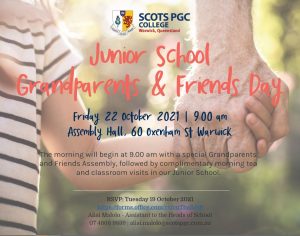 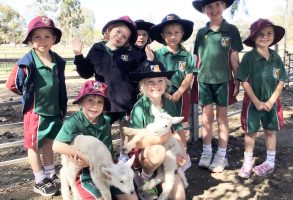 Our Preps meet the lambs

Our Preps meet the lambs You may have heard the lambs bleating during school dropoff… Lambing season is in full swing and our SCOTS PGC ewes have welcomed newborn lambs to the flock over the last month or so.

Our Prep students (amongst many others) have been especially excited to visit the lamb nursery and ensure our ewes are doing a good job of mothering their babies.

Take a look at the happy snaps! 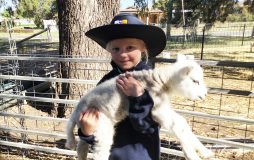 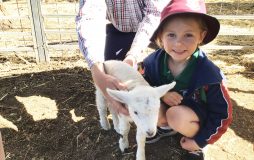 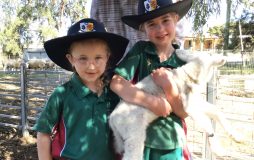 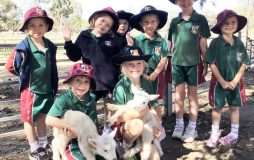 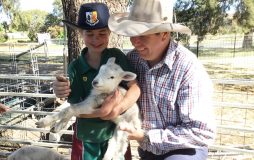 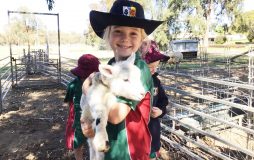 Mr Tom Bradbury | Assistant Director of Co-Curricular Activities Welcome to Term 4 – our final stint for the 2021 year.  We are looking forward …

Welcome to Term 4 – our final stint for the 2021 year.  We are looking forward to an action-packed 8 weeks which will no doubt go very quickly!  Here’s a quick update on what’s been happening and what’s on the horizon.

A reminder these activities start next week:

All registrations for Arranmore Activities to Mr Bradbury please via email at your earliest convenience. Places are still available in Netball and Futsal only.

Boys and Girls wishing to play Cricket are asked to email Mr Bradbury their EOI ASAP.

Registration details will be emailed to all students and families once EOI’s have been received.

Over the school holidays, seventeen of our students represented Queensland West at this Championship in lieu of the scheduled National Schools event.

Ten girls played at the AFA State Futsal Centre in Oxley whilst seven of our lads played at Nissan Arena at Nathan.

The Under 19 Girls finished 3rd in a fantastic result with Maddison Kane and Lucy Jackson figuring large in the team’s performance.

In the Under 19 Boys Geoffrey Warren, Toby Callaghan and debutant Mika Repo had a tough competition but thoroughly enjoyed the experience.

At the conclusion of the competition, four of our girls were named in the Allstar Team for their respective age groups. This is the top ten players in the division as nominated by all the coaches in the division. We congratulate Amira Duffy, Phoebe Sellick, Krystal Petersen and Erin Keogh on this prestigious accolade. We also congratulate Emma Bradbury named Players’ Player in the U16 Team and Maddison Kane voted Most Valuable Player in the U19 Team.

All in all, our players contributed significantly to the performance of the Queensland West Teams and this was a fitting end to our Futsal participation for 2021. 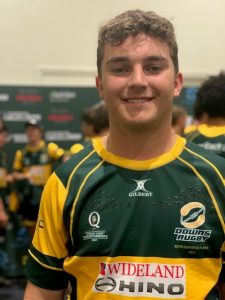 Also held over the holidays were the Queensland Junior Rugby Union Championships. These were held in Toowoomba at Toowoomba Grammar School.

SCOTS had two lads representing Downs Rugby in this event following their participation in the Teenage Rugby Competition in which we participated during Term 2.

Both Jesse Bohm Under 16 and Tama-iti Saxton Under 14 represented the region as the reserve hooker in their respective teams. Although reserve front-rowers, they both contributed significantly to their team’s performance.

Tama-iti was quite the little general starting on the field in their final playoff match. His passion, direction and clear communication were significant features of his game that led the team to a resounding win in their playoff game. The Under 14 Team finished 5th with a convincing 29-10 win over the Sunshine Coast in their final playoff.

Jesse slotted in really well filling the hooker position. His set-piece play, particularly the lineout throws looked very consistent and his running game was quite imposing. His ability to run into a gap and then pop a little pass behind the defence was definitely a pleasure to watch. The Under 16 team finished 7th which was not what they hoped but a courageous performance nonetheless.

We congratulate both lads on their performance. 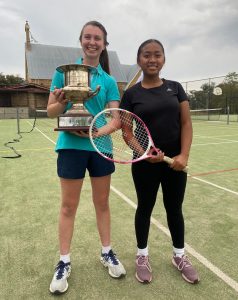 On Thursday we resurrected the College Tennis Championship. We only had two competitors in each of the Senior Boys and Girls Divisions and the Junior Boys Divisions but we had to start somewhere. The weather was a little murky but the enthusiasm was high with lots of fun and some great skills on display.

The results of each category were as follows…

Junior Boys Singles – Ben Carey took on Oliver Swift in this division with the game starting off quite tight, but after a settling in period Ben started to assert his ascendency to push on and take the match 6-2.

Senior Girls Singles – Grace McIlroy took on Ginger Aranas in a very entertaining match that saw the score ebb and flow through each game. Despite the many points won by each Grace managed to pinch the winning point of the majority of games to take the title 6-1 at the end of the contest.

Senior Boys Singles – Late nominee Hamish Swift staged a massive comeback in the Open Boys after being 3-0 down to a very solid Daniel Hughes. Hamish staged a huge turnaround to claw his way back into the match at 4-4. The final two games were quite a drawn-out affair with deuce reached on four occasions in the final game. Hamish persevered through both games securing the title with a 6-4

Congratulations to all our players on their efforts. Next week the boys will wrap up the Championship with a doubles match to determine our College Champions. 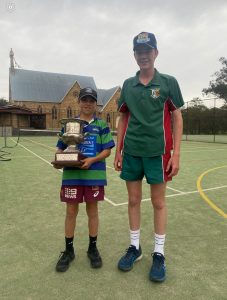 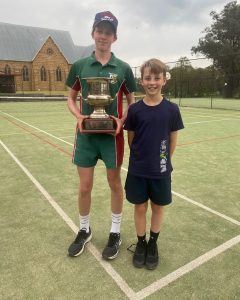 The competition commences this Friday with several teams contesting the various age groups. All registered players have been emailed the teams and the draw. Our wonderful volunteers from Years 9-12 have generously offered their time to ensure we can conduct the sessions in a professional manner. Please join us on Thursday 21 October at 4:30 pm for the Official opening and ribbon-cutting ceremony.

Come along for  Sunset Drinks, Sausage Sizzle and entertainment by our College Rock Band.

We look forward to seeing many of our families there.  Please RSVP by Monday 18 October to College Reception or sarah.henry@scotspgc.com.au