Mr Peter Wilson | Director of Co-Curricular Activities Lifeline, one of Australia’s leading crisis-support organisations, is currently experiencing the highest number of calls to its Help Center in its fifty-year history. The uncertainty, lockdowns and misinformation around the pandemic have had massive impacts on mental health across Australia. At a …

Lifeline, one of Australia’s leading crisis-support organisations, is currently experiencing the highest number of calls to its Help Center in its fifty-year history.

The uncertainty, lockdowns and misinformation around the pandemic have had massive impacts on mental health across Australia. At a time like this, I consider myself extremely fortunate to be part of the SCOTS PGC College community. The willingness of our community members to listen and support each other is a powerful panacea to the current COVID environment.

There is a real sense of being in this together and weathering the “storm”. This trait, I feel, is one that the people of regional Australia develop as they face the vagaries of the weather and its effects on agriculture.

Another benefit of the College’s sit-down lunch for staff and students is the opportunity it provides to decompress. The chance to share experiences, both positive and negative, is a powerful contributor to mental wellbeing.

I would encourage all members of The SCOTS PGC College community to take a moment to check on someone else.

In terms of staying physically safe, the College will continue to take advice from the Darling Downs Health Unit, but we are all personally responsible for the mental health of our community.

R U OK is an important conversation starter!!! 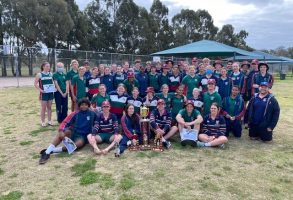 This week, the Border District Athletics was held at Warwick SHS’s Hamilton Oval. The day was filled with personal best performances from many of our athletes which led to a very successful result for the College Team as a whole.

In the race for the Age Championships, several individuals shone bright with their performances.

In the Under 13 age group, Elliza Moore-Kirkland secured the runner-up spot in the girls, whilst Ellyse Kruger bagged the Championship and Bailey Harm secured the boy’s championship.

Finally, in the Open boys, Beau Kendall secured the runner-up spot and Cooper Seng pulled off the age championship.

We congratulate all our students on their individual and collective results and we look forward to seeing them compete again at the Warwick All Schools this coming Wednesday.

Our 9-12 year-old athletes will contest the Southern Downs Athletics on Monday. After the successful conduct of the 1500m events last week that saw Hayley Wainwright take out the 12 years girls, Lachlan Groves win the 12 years boys, Bethany Moore-Kirkland place second in the 11 years girls event and Cooper Keogh take fourth in the 10 years boys, we can’t wait for the full carnival to commence.

On Monday 16 August, the main carnival will be conducted at Allora SS with track events from 80m through to 800m, and the field events of Long Jump, High Jump, Shot Put and Discus to be conducted for selection to the Southern Downs Team.

We wish all students the best of luck at this event which will be the first of its kind for our 9, 10 and 11-year-old students after last year’s cancellations due to COVID. We remind students and parents to return their forms on arrival at the carnival to Mr Peter Campbell.

In the Open Hockey competition, our Mixed squad had a strong 7-1 win against the Green Team to secure the minor premiership. All team members were contributing to the play but as always we were slow to start which will need to improve for the Darling Downs Schools Cup in Week 8.

In the Interschool competition, SCOTS 2 took on Warwick SHS in what was a fast-flowing affair. The game was a tight one with SCOTS 2 scoring first followed by Warwick. SCOTS hit back to again take the lead, but Warwick would not give up and came back to even the scores with about 20 minutes to play. A long struggle ensued but with 8 minutes left SCOTS pinched their third goal that would eventually win them the game, but not without some tense minutes of scrambling defence.

SCOTS 1 had the late game and were struggling for numbers as they took on Assumption. Despite the lack of numbers and far more experienced opposition, they put up a fantastic effort. SCOTS managed to score first and secured a second goal to take them to the break 2-1 in front. After a sustained barrage from Assumption, they finally succumbed to an equaliser. The game see-sawed for the remainder of the game but neither could gain the ascendency and the game finished at a very creditable and deserved draw.

Next week, SCOTS 1 take on SCOTS 2 in the Semi-Final with the winner to take on Assumption in the Grand Final the following week. The Semi-Final commences at 5.25 pm next Wednesday at the WHA Fields at Queens Park. Spectators are welcome!

Mrs Christine Peterson | Head of Library Services The most exciting week of the year in the Libraries is almost upon us! Old World, New … The most exciting week of the year in the Libraries is almost upon us!

During the month of August, we will be celebrating Book Week and we are excited to share that this year’s theme is Old World New Worlds, Other Worlds.  In preparation for Book Week, students across the College have either been engaging with the shortlisted books or listening to the audiobook, How to Bee by Bren McDibble.  How to Bee is a beautiful story (that aligns with the New Worlds part of the theme), that invites students to consider a world without bees and how it would impact us socially and economically.  Readers need to consider if they would prefer to live isolated on a farm, where they work hard and have little but are loved, or if they’d rather live in a city, where they are rich and have everything but aren’t loved by family.   This reading follows on from Term One when we studied ancient cultures as part of the Old World theme.  In Term Four, we will be reading about fantasy worlds which aligns with the Other Worlds topic.

On 27 August, the College will host its annual Book Week parade where students across all three sub-schools are encouraged to dress up as characters from books that match the theme Old World New Worlds, Other Worlds.  Given the scope of this year’s theme, students could come dressed as someone/thing from a classic, from fantasy, from science-fiction or from history.  Following the parade, our P&F will host a morning tea for parents – COVID restrictions permitting.

From Thursday 26 August and the week that follows, we will also hold the Scholastic Book Fair which is an opportunity for students to purchase from a wide range of age-appropriate books.  Students will be able to come and shop in the WALEC before and after school (8-8.30am each morning except Monday and 3.10-3.30pm in the afternoons).  I look forward to seeing what books the students select!

As an avid reader and Head of the Libraries, I encourage you during the month of August, to maybe have a family book that you all read together.  Listening to reading helps children develop their listening comprehension – something that is vital in understanding what they are hearing in class.  If you want a book to share with your children, please come and see me and I am happy to help.

Keep Calm and Carry on Reading 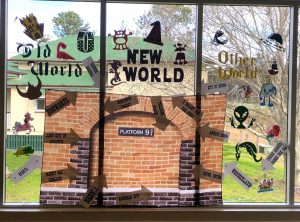 A note from the Uniform Shop… If your child is currently in Years 6-11 and requires a new blazer next year, we ask that they …

A note from the Uniform Shop…

If your child is currently in Years 6-11 and requires a new blazer next year, we ask that they please attend the Uniform Shop for a fitting as soon as possible. COVID is significantly impacting deliveries and the supplier has recommended orders are placed by 27 August 2021 to ensure delivery in January 2022.

Year 6 Families: A reminder that when your child enters Year 7 next year, they will require their new blazer for Term 1 2022 for Assemblies, photograph day and Chapel services where students must wear a formal uniform, so ordering now will ensure they have arrived by this time.

Appointments can be made by contacting the Uniform Shop at the details listed below.

The August P&F Meeting will be held this Monday 16 August at 6.00 pm in the Archive Centre near the main office.  Part of the discussion will be around planning for the upcoming P&F events at the school (e.g. Movie Night).  If you can’t make it in person but would like to connect via Microsoft Teams online, please let us know.

The Father’s Day gifts are all wrapped ready for the Junior School Father’s Day stall on Thursday 2 September.  Thank you, Rachael, for all that extraordinary gift wrapping!

There will be $5 and $10 gifts available and we will again be placing the gifts in a brown paper bag so inquisitive fathers can’t see them.  Next week we will be putting out a call for some volunteers to work on the stall.

Planning for the JAM school movie night is fairly settled – it will be held on Friday 10 September. The event will start at 5.45 pm and the movie will commence at sunset (around 6.15 pm).  We have arranged a ticket package for $12.50 which covers the movie, pizza, drink and popcorn.  The movie is a classic from Dr Seuss, “The Lorax”.

The online booking link will be sent out next week via Facebook and Newsletters.  We hope to see you there! 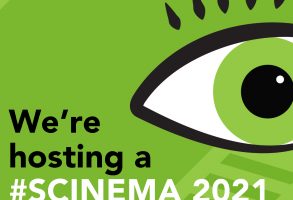 Join us for a Scinema Experience!

Ms Lynne Naudebaum | Science Teacher In honour of National Science Week which runs from 14-22 August, the SCOTS PGC STEM Club is hosting a …

Join us for a Scinema Experience! In honour of National Science Week which runs from 14-22 August, the SCOTS PGC STEM Club is hosting a SCINEMA screening next Wednesday night in the Bandy Theatre.

SCINEMA is the largest science film festival in the southern hemisphere showcasing the best in science cinema from around the world. SCINEMA is a celebration of the power of the moving image to inspire the young, satisfy the curious, explain the baffling and ask the impossible.

College families are invited to join the STEM Club from 6:30 pm to 7:30 pm for the full SCINEMA experience, which includes a series of short scientific films and… popcorn of course!

We hope to see you there!

A career in the Defence Force?

Toowoomba Defence Force Recruiting is hosting a number of Information sessions during September. If you’re interested in learning more about a career in the Defence …

A career in the Defence Force?

Toowoomba Defence Force Recruiting is hosting a number of Information sessions during September.
If you’re interested in learning more about a career in the Defence Force, take a look at the Toowoomba September Information Sessions flyer. 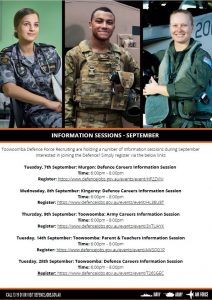