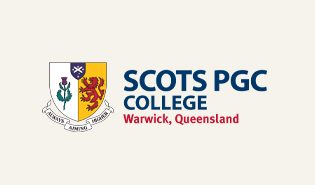 Mr Kyle Thompson | Principal Another term has flown by. It never ceases to amaze me the speed at which days, weeks and months pass. Perhaps (definitely) this speed seems to increase the older I get. Each term at SCOTS I find myself looking forward to the events and significant …

Another term has flown by. It never ceases to amaze me the speed at which days, weeks and months pass. Perhaps (definitely) this speed seems to increase the older I get. Each term at SCOTS I find myself looking forward to the events and significant milestones contained in the weeks ahead. Often my initial thoughts are that there is plenty of time to organise, plan and prepare for exams, sporting carnival, meetings, assemblies, etc, etc, etc. Then I find that life often gets in the way of planning and organising, and events seem to rush towards us at a pace that defies characterisation.

As I reflect, an analogy of a rollercoaster ride strikes me as relevant to each and every school term.

You start at the station, it seems still and calm, you look forward and think you are prepared for the dips and turns, rises and falls, and everything in between. Then there is the anticipation as the rollercoaster moves from the platform and along the tracks (Travel Day). You look forward and upwards as you begin the climb towards the first dip. It is controlled in almost slow motion until you reach the top (Day 1, Week 1).

Then it begins. With a rush. You speed down that first hill (Week 1) at break-neck speed and suddenly each curve, corner and dip is thrust upon you as everything moves quickly. Too quickly at times yet you still find yourself hoping to move through the challenging parts of the track more quickly than the incredible quickness of the ride so far. You almost are wishing time away to navigate through some parts of the course (Term). Occasionally the rollercoaster slows to a speed that seems sedate and controlled. You are able to breathe and take in the surroundings. You see more challenges in the course ahead but there is serenity for a brief period where you catch your breath.

Then the next dip speeds you up again, and the rush, the apparent challenges regarding time and fitting everything in returns (exams, assessment, marking, sport, events, music). Everything is happening quickly again. That same sense of time moving too quickly but not quickly enough returns as you look forward to the end of the ride (Week 9). Still too much to do, still time, but time is running out.

Then, almost as quickly as it started, everything slows (last day of term), you look to the holidays (getting off the ride and onto the platform), and you reflect on the experience of the ride (the last 10 weeks), the joys, the excitement, the challenges and scary bits. You leave the carriage of the rollercoaster, grateful and pleased with the experience. Your hair might be a bit messed up from the ride, there is emotional exhaustion from the experience as well but also a sense of satisfaction from conquering new things, facing fears and challenges and sharing all of these things with others who have also experienced the ride. You also note you are ready for a rest from the rollercoaster experience. And hopefully, you equally look forward to your next ride (Term 4).

Have a great break from this ultimate ride, called SCOTS PGC. Thank you to all staff who maintain the good order of the track and enhance the experience of our students committed to the ride. Thank you again to all our families for their support this term and we can’t wait to see you back on the platform for our Term 4 experience.

Queensland Invitational Futsal Championship Over the coming school holidays, several SCOTS students will be representing Queensland West at what would have been the National Schools …

Over the coming school holidays, several SCOTS students will be representing Queensland West at what would have been the National Schools Futsal Championships.

This event has been unfortunately cancelled and has morphed into the Queensland Invitational as per last years COVID affected Nationals. We wish the following students all the very best as they take on the best teams in Queensland in this very high-level competition.

The competition runs from September 27-30 with the boys playing at Nissan Arena at Nathan and the girls playing at the Australian Futsal Complex at Oxley. We also wish Mr Derek Kane (U14, U19) and Mr Tom Bradbury (U15, U16) the very best as they coach their respective girls’ teams at this event.

Best of luck to all players and coaches and we look forward to hearing of their experiences on their return to the College.

In Term 4 we will be running the following Activities for students in Years 1-6 commencing Week 2 and running through until Week 7.

All registrations for Arranmore Activities to Mr Bradbury please via email at your earliest convenience.

Boys and girls wishing to play cricket are asked to email Mr Bradbury their EOI ASAP.

I have received a few but we want to start Cricket in Week 1 of Term 4 with Interschool and Club games scheduled on Wednesday and Saturday. Registration Details will be emailed to all students and families once all EOI’s have been received. Please complete this by Wednesday 22 September.

We are looking at Under 11, Under 13 and Under 16/17 Teams but also are looking at Junior (Under 14) and Senior Teams for the Interschool competition.

In 2021, we would like to reinstate the previously contested College Tennis Championships to the College Calendar in an attempt to re-establish this beautiful sport within our Community.

All Nominations to Tom Bradbury via email: tom.bradbury@scotspgc.com.au

***Competition will be dependent upon nominations received***

SCOTS JUNIOR TOUCH COMPETITION – Term 4
It’s coming back in Term 4! Our very popular Junior Touch Competition will kick off next term under the expert guidance of Ms Jaime Slattery and her band of merry helpers in  Years 10 and 11, who will assist in coaching and refereeing.

Registrations are open for teams and individuals here: SIGN UP HERE

Age Groups will be U8, U10, U12, U14 and teams from across the district are invited to nominate or individuals may do so as well and they will be allocated to a team to balance numbers.

This week we were finally able to host our JAM Colour Fun Run to celebrate the amazing fundraising efforts of the junior members of our College. This was a fantastic way to close out the term and take some time out to celebrate a great term of learning.  Take a look at some of the happy snaps from the day… 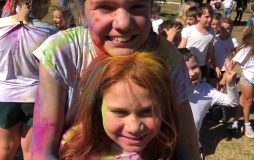 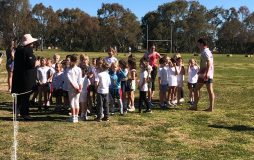 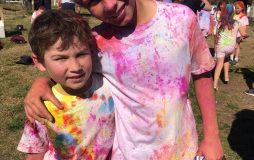 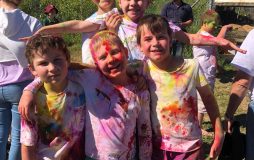 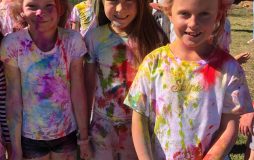 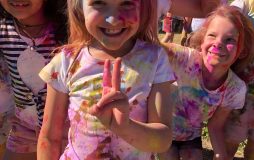 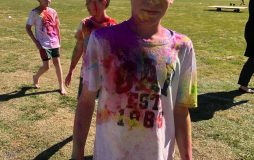 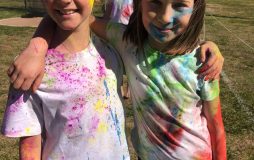 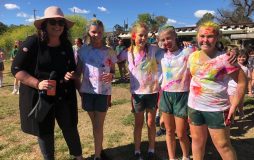 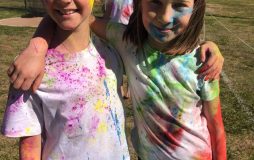 Our College reception won’t be the same without Clare, who today, spends her last day in the office before she heads off on maternity leave to embark on the wonderful journey that is parenthood.  Clare has been the friendly face at the front desk for some time now.  She is loved by all students and staff and our College community will miss her shining personality around the campus.  Congratulations on your new path Clare, your SCOTS PGC family are very happy for you!

Mrs Toni Crawford will officially take over the Reception reins at the start of Term 4.

A special thank you to Sarah Monk, who has done a wonderful job in educating our Year 6 students this term alongside Mrs Charmaine Butler.  Sarah has expertly filled the shoes of Ms Melissa Cole, who will return from long service leave in Term 4.  Thank you, Sarah!

Best of luck to Grace Buchholz who is leaving the College to focus on her chosen career in Vet Nursing.  Grace has expertly coached our Equestrian students over the past couple of years and was instrumental in bringing campdrafting back to SCOTS.  Best of luck Grace, we will miss you!

From the Equestrian Team

Mrs Cheryl Paganin | Equestrian Co-ordinator It is the end of another term and we wish all students, parents and staff a happy holiday. But …

From the Equestrian Team

It is the end of another term and we wish all students, parents and staff a happy holiday.

But before we go a quick wrap up of the week.

On Wednesday morning we held a farewell breakfast for one of our much-loved coaches – Grace Buchholz.  Grace has been with SCOTS for a number of years and will be sorely missed.  However, we wish Grace all the best with her studies and chosen career in Vet Nursing.

Results from our Competitors last weekend

Results handed in are as follows:

Congratulations to all other riders.

Once again congratulations to all riders.

It is going to be busy!

David Finch Lessons – get your name down now!

Our Year 6 class have recently been studying the Asian culture as part of their Humanities and English units.  This week, they celebrated their learning …

Our Year 6 class have recently been studying the Asian culture as part of their Humanities and English units.  This week, they celebrated their learning and tested their culinary skills by sharing a traditional Asian dish with their classmates.  They were also encouraged to dress in the colours of their chosen Asian country’s flag, which made for some colourfully clad students!  This was a great way to close out both the term and the unit they were working on.  It was great to see these little Masterchefs enjoying themselves and all things Asian! 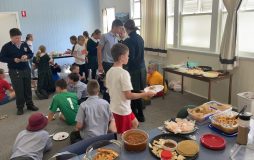 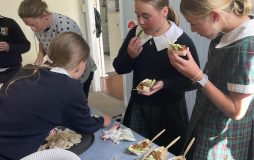 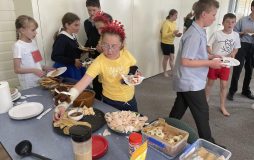 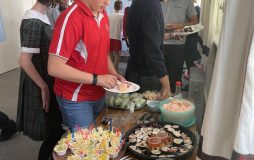 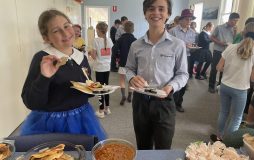 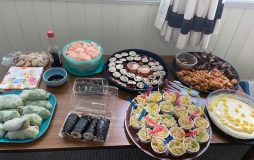 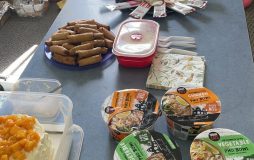 Earlier this week, our Junior School students were treated to a performance from the Arrows Skipping Team.  Comprising twelve members aged from Years 3-6 from …

Earlier this week, our Junior School students were treated to a performance from the Arrows Skipping Team.  Comprising twelve members aged from Years 3-6 from Sherwood State School, the ‘Arrows’ stopped into SCOTS PGC as part of their annual tour.  Our students watched on in awe as the Arrows performed their half-hour routine which included a diverse range of individual and group skipping tricks.

The visit from the Arrows this week provided the perfect inspiration for our own students, who today, embarked on their own skipping challenge through the Jump Rope for Heart Foundation.  Students will take part in the skipping program to help raise funds for heart research, patient support and programs that help save lives.

Your trash is our treasure!

The Year 8 STEM class is currently working on an upcycling/sustainability project. Some of the students are creating multiple upcycled pieces and are hoping to …

Your trash is our treasure!

The Year 8 STEM class is currently working on an upcycling/sustainability project. Some of the students are creating multiple upcycled pieces and are hoping to increase their choice of materials donations of the following items:

Please drop any items to the office to the attention of Mrs Kasey Casey.